Disney is a Big, Fat Liar to all Little Girls and It's Not Fair

Seriously. The Disney Princess movies should come with a disclaimer at the beginning. Warning: Your life will be nothing like this movie when you grow up. I wish it did, but the sad truth of it is: life turns out more like Bridget Jones' Diary. I'm sure you grew up watching Disney movies. Even if you're a boy, you probably watched them when you were younger, especially if you had sisters. I'll admit it, I love Disney movies. But they're full of LIES. There is never a prince with shiny hair waiting to rescue you on his stallion. (Wouldn't it be awesome if there was, though?) If life was like a Disney movie, a handsome man would show up, love me for my brains as well as my looks, and then we'd share true love's kiss and everything would be perfect. I'd be suddenly healthy, we'd move into his castle, and the people would embrace me as their princess. I would be a good and fair ruler.

But that fairy tale, it's such a lie. Such a let down. Especially when you've hit 32 and you realize that you are turning into Bridget Jones. You know where she has that epiphany and realizes that she has to change something or else she's going to live a life where her major relationship is with a bottle of wine and she'll finally die, fat and alone, and be found three weeks later, half-eaten by wild dogs? Or else she was about to turn into Glenn Close in Fatal Attraction? The epiphany she has in her 32nd year? Yep, I'm in my 32nd year and I'm having the epiphany that I don't want to die fat and alone only to be found three weeks later, half-eaten by wild dogs. I'm not fat at the moment, but I am alone. That could lead to the eating of LOTS of chocolate, which could lead to me dying fat and alone and being eaten by wild dogs. Sigh.

Out of all the Princesses, I'm the most like Belle. I love to read. I yearn for something more than this provincial life. Behind my fair facade, I'm afraid I'm rather odd. I have a dreamy far-off look and my nose is always stuck in a book. I am also intelligent, witty, nice, cute, I can quote movies, I'm fun to be around, and gosh darn it, people like me. Yes, I'm an uber-nerd, but so are a lot of guys. So why the hell am I still single? Oh yes, it's because apparently Prince Charming no longer rescues you off your couch. A real Prince would. I don't do clubs. I don't drink except for once in a blue moon, so bars are really out. Plus, the guys in the bar that hit on me are NOT the ones I want. Cheesy pick-up lines are not cool. Just say hello. The guy I'd want, wouldn't hit on me. And I wouldn't talk to him unless I was plastered off my ass. That would not be a pretty sight and I can guarantee you, he would not think, "Finally, I've found the one!". Nope, he'd be doing his best to escape.
My mental picture of myself when I'm having a good day: 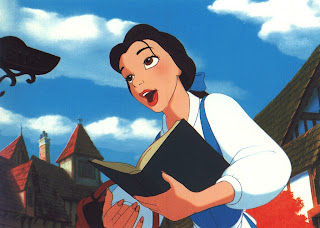 My mental picture of myself the rest of the time: 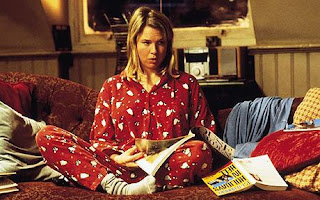 I want my Prince to have a brain as well as good looks. Looks will fade, he needs to be intelligent and interesting so we never get bored with each other. (By the way, the Prince in Beauty and the Beast was the least attractive of all the Princes in my opinion. Eric from The Little Mermaid was way cuter. Just sayin'.) He should be funny, my jokes shouldn't go over his head. He needs to have a kind heart. Be someone who likes me, "just as I am". I have more to add to that list, things that are lot to ask of someone, but that's what I need to start off. To keep going, it would help it he loved The Beatles, Battlestar Galactica (okay, anything sci-fi), loved to read, the list goes on and on. I know I have high expectations, but I believe everyone should. I'm not going to lower them just to be with someone. Then I'd just be with someone but be unhappy because I wasn't in love.

So, where can I meet this dream man? There must be someplace, right? In my school the options are men 15-20 years older or 10 years younger than I am. Not promising. Where do I like to hang out? A library. A bookstore. Maybe go to a park and read. I work out at home or at the gym at my apartment complex. You must also keep in mind that I am poor. That cuts off a lot of options.  But anyways, even when I do those things, I still lack the courage to talk to guys. Am I giving off some kind of funky "stay-away-from-me" vibe? I have tried online dating before and I could do it again, but I really don't want to. I hate making a profile where I can't tell the whole truth about who I am. Plus, I feel like it should happen more organically. For all that I believe Disney lied, I still believe in true love and I believe it's out there some where. I think I just bump into him one day. Maybe at Trader Joe's. Maybe he'll hit on me at Barnes & Noble. Hear that Fairy Godmother? Now, get to work! Stop slacking!

I must work out this problem fairly soon. I do not want to spend New Year's Eve singing "All By Myself" a la Bridget. I would love to hear any suggestions. What do you think I should do about this? Where should I be hanging out? Where are all the single, good men in the world? What does a guy want a girl to say that would make him want to get to know her? Should I try online dating again? Even though it has led to some awful boyfriends in the past? Should I volunteer somewhere? What hobbies do men do that I could do too? What things in general do guys do on the weekend? Help me for the love of God!  ; )

In the meantime, to my version of Mark Darcy. The man with personality of Paul Rudd and the good looks of Michael Fassbender, but he's not aware of how good looking he is, so he's not a jerk and still a geek. Fix your damn internal GPS. You're running really late. And I don't want to spend my 33rd year alone.
Posted by Unknown at 3:45 PM

Email ThisBlogThis!Share to TwitterShare to FacebookShare to Pinterest
Labels: Being Single, Best Way To Approach A Man, Bridget Jones, Dating, Disney Movies Lied To Me, How do you Date, How to Find Love, Love, Michael Fassbender, Paul Rudd, True Love, Where Do the Men Hang Out