Okey-dokey, I have good news! Starting on Tuesday ...

I am going back to work part-time!

Yay! Go me! I will be working at my old place of employment, as a file clerk. They know all about the MS, so it wasn't a problem for me as far as letting them know I was sick. They were there and stood by me when I was diagnosed. It's a medical office. They know what MS is. It's a nice, easy, no-stress job and it's only part-time. Different from what I originally did there, which is way too stressful for me to go back to, but still among the amazing people I used to work with.

I'm so excited, I can't even tell you! I've been out of the medical field for awhile now, but next week, I'll be rocking these again: 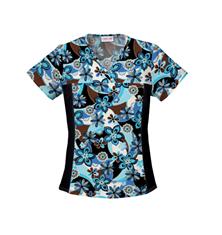 Beautiful scrubs. I had to go buy new ones. Thanks Topamax for the lost poundage. That was a cool side effect that I appreciate.

It's so surreal to me that I'm going back. When I was diagnosed and tried to go back about a month or two later; I was so sick, I just couldn't do it. Finally, seven years later, I am finally feeling halfway back to normal. Which is awesome for anyone with Multiple Sclerosis. I think this is a great thing too because it will get me out of the house. If you have a job to go to, you spend your time more effectively. Instead of watching Teen Mom 2 marathons all day, maybe I'll get at least one chore done.

So, if the blogs slow down, you at least know why. I aim to keep them up, but I don't like to make promises I can't keep. I will still blog, it just may be less frequently. Then again, maybe they'll pick up.

And hey, who knows, maybe I'll meet a cute sales rep and have something fun to tell you! Keep your fingers crossed!